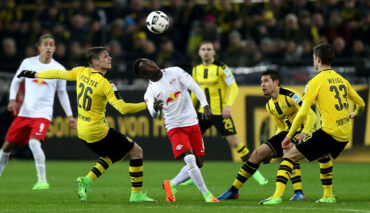 The DFB Pokal finalist will lock horn in the matchday 32 of Bundesliga 1 before the crunchy final of the cup competition. There is still to play for the places to be won and lost at both ends. The yellow wall of Dortmund will welcome Leipzig on Saturday afternoon at Signal Iduna Park for a crunchy tie in the league. The red bull will be looking to challenge the league leaders Bayern Munich’s dominance and hope for them to lose points in this crucial stage of the season. On the other hand, Dortmund will look to push for the top 4 spots with a win this match and to qualify for the champions league next season.

Both teams successfully qualified for the domestic cup competition and will lock horn for a trophy later this month. It will be crucial for both teams as this is the only trophy available to win for them in this season. Dortmund had a rough patch of form at the start of the New Year and now they seemed to be recovered from that poor run of form.

The yellow wall was crashed out by Manchester City in the champions league this season and now Dortmund is struggling to finish in the top four of the league, which will guarantee their berth for the champions league next season. Also, Dortmund’s star striker and young sensation Erling Harland is back to his best after a rough patch of form. It will be interesting to see his performance in this fixture.

The last meeting of these two teams ended in favor of Dortmund who clinched an impressive 3-1 win against their opponent in away conditions. Dortmund is currently at 5th spot in the league only one point behind the 4th spot team Frankfurt. They are currently 9 points behind their opponents who occupy the 2nd spot behind the league leader Bayern Munich. Dortmund will go into this match with an impressive win 0f 5-0 against Holstein Kiel in the German cup semi-final.

RB Leipzig had an amazing season except for the Champions League campaign. They were ousted from the tournament in the early stages and have not managed to replicate their impressive league form in Europe. They are currently pushing for the league title and putting the pressure on league leader Bayern Munich and they will play the German Cup final against the same team later this month.

The Red Bull team is currently at the 2nd spot at the moment trailing 7 points from the league leader Bayern Munich. They will be hoping for a slip from Bayern Munich at the top which seems very unlikely. However, they will focus on their Saturday performance and try to claim the all-important three points to put pressure on the league leaders.

The yellow wall of Dortmund has a clear upper hand against their opponents in this fixture. The teams faced each other a total of nine times, where Dortmund won 5 games and RB Leipzig won two games. Two games ended in a draw.