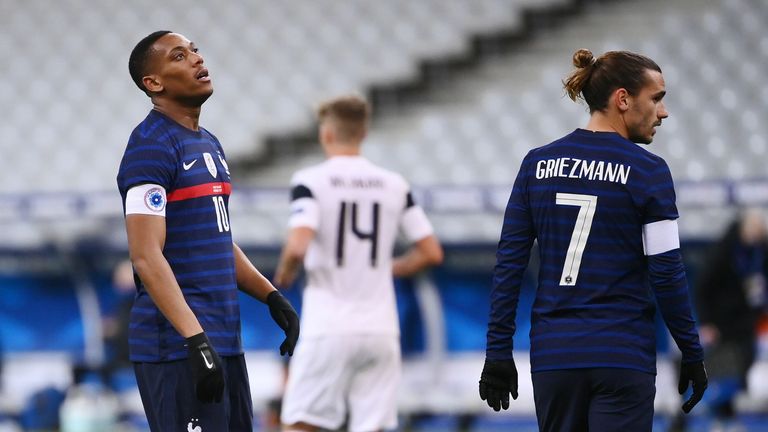 In the match of the 6th round of the qualifying cycle of the 2022 World Cup, the national team of France will play against the national team of Finland in a home match. The match will take place on 7 September 2021 and start at 21:45 Moscow time. The prediction for the match France – Finland will help to identify the favorite of the upcoming match.

Before making the prediction for the match France – Finland, let’s consider the history of the teams’ performance in the current World Cup 2022 qualification. France started the qualification with a draw with the Ukrainian national team (1:1), then the reigning world champions without any problems beat the national teams of Kazakhstan (2:0) and Bosnia (1:0). In the fourth round, Deschamps’ trainees drew with Bosnia (1:1), and in the fifth round, they drew with Ukraine (1:1). After 5 games played, the team is in first place in the standings and has 9 points scored. France has scored six goals and conceded three goals.

The national team of Finland played three matches in the qualifying round. The team drew with Bosnia (2:2), then drew with Ukraine (1:1), and beat Kazakhstan (1:0) in the previous round. After three matches played, the team from Suomi country is in second place in the standings with 5 points scored. The gap with France is four points, but the French have played two more matches. Finland has scored 4 goals and conceded 3 years.

To make the prediction for the match France – Finland more informative, let’s consider the results of the last five face-to-face matches of the teams:

In the sixth round of the qualifying cycle, France is one of the candidates for advancing to the final of the World Cup. Deschamps’ trainees are consistently scoring points, although they make mistakes, for example, in matches with Bosnia and Ukraine. In the upcoming match, the reigning world champions will play from a position of strength, will attack a lot, and will try to finish the match with an advantage in the score. Finland will play cautiously, defensively and will look for its chance in counterattacks. There will be few goals scored in the game and France will win.

The likely outcome is the victory of France.