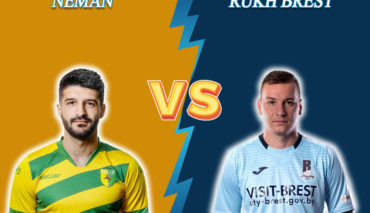 Bettonus has prepared a free prediction for the upcoming event that will be held on May, 9. This will be the match between Neman Grodno and Rukh Brest in the framework of the Belarusian Premier League eighth round.

The team’s migration is going in the wrong way. Neman has moved to fourteenth place in the standings. In the last round, they lost to BATE with a 1:3 score. However, in the penultimate round, the players defeated Energetik with a 3:0 score. Their series of the last five matches looks as follows: two losses, two draws, and just one victory. Kovalevich’s team is going to improve their performance in the upcoming event. Nevertheless, their staff can boast of having one of the best scorers in the championship — Gegam Kadimyan.

In the last round, the team played a draw with Gorodeya with a 1:1 score. Sednyov’s team steadily scored points in the last four matches (6). However, they are still eleventh due to a great competition between teams in the middle part of the standings. The main problem of Rukh is the contrast of their bad attacking and great defensive football. In the last five rounds, the team kicked just 2 goals.