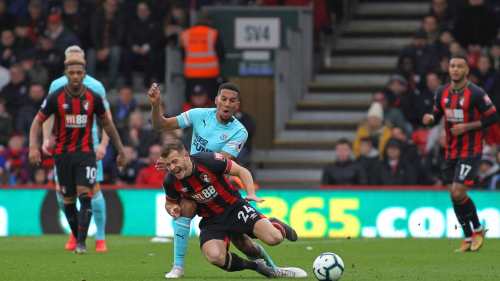 In the 8th round of the English Premier League, Newcastle and Bournemouth will play against each other on September 17. The match will start at 17:00 Moscow time. Here are the teams’ conditions and the betting odds for the match.

The team’s performance in the last season can be divided into two parts. In the first round, the Magpies were fighting for survival. During the winter break, the strength of the club was significantly boosted, and they eventually finished in 11th place. In the summer off-season, Newcastle spent even more on strengthening the squad.

Eddie Howe’s team scored only 7 points in 6 matches. The team is in the middle of the standings for now. They have four draws, one win, and one loss.

The team didn’t lose in four games in a row at the start of the season, including the game against Manchester City. The game with the champion ended in a draw (3-3). In the last two rounds, the Magpies lost to Liverpool away with a score of 1-2. They also played against Crystal Palace at home, and the match ended in a 0-0 draw. The team has not lost at home in six games in a row. They have three draws and three victories.

Last season, Bournemouth played in the EFL Championship. The team took second place in the standings and was promoted to the EPL. The club fought with Fulham for 1st place in the championship till the last breath.

The Cherries have as many points as Newcastle. They have two wins, three losses, and one draw. All three defeats were big. The Cherries lost to Arsenal (0-3), Manchester City (0-4), and Liverpool (0-9).

In the last round, the team had three points. In the match with another newcomer, Nottingham Forest, Bournemouth won away with a score of 3-2. The team has a win and two crushing defeats away this season.

The Magpies, who will be playing at home, are stronger than Bournemouth. In our prediction for the Newcastle vs Bournemouth match, we urge you to place a bet on the victory of Newcastle with a coefficient of 1.50.

Probable result – Victory of Newcastle with odds of 1.50.