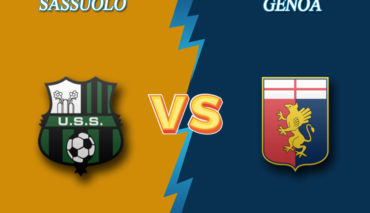 On July 29, at 17:30 GMT, Sassuolo Calcio will host Genoa. Their game will mark the matchday 37 of Italian Serie A. Here are some free tips by Bettonus.

Last week, the Neroverdi (the Black and Green) faced the 2:0 away defeat from Napoli. After February 16, it was the first game where Roberto De Zerbi’s players failed to score. Technically, such a result could be justified by the lack of tournament motivation and a tight schedule, because Sassuolo had played 5 previous fixtures with strong opponents, which took a lot of energy. The upcoming game will take place at their home ground, where they had 2 wins, 2 draws and 1 defeat in the last 5 matches.

Last week, Il Grifone (the Griffin) hosted Inter Milan and lost 0:3 to them. With 2 matches before the end of the tournament, Genoa sit the 17th place after 9 wins, 9 draws and 18 losses in all matches. As to away stats, Davide Nikola’s team has a record of 3 wins, 8 draws and 7 defeats with pretty bad performance in defense. On average, Il Grifone (the Griffin) concede 2 or more goals per away game. However, Genoa have lost only once in their 8 previous away fixtures.

Less than 3 goals were scored in 6 out of the last 8 head-to-head Serie A battles. You can consider Total Under 2.5 in the next match for 2.47.

Despite their attacking potential, Sassuolo Calcio have been facing significant issues in defense recently. On the other hand, Genoa show good attacking play in away fixtures – 13 scored goals in the last 6 games, that is more than 2 goals per game on average. Genoa ITO 1  is estimated at 1.45.