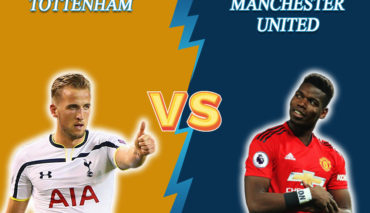 The meeting of the English Premier League thirtieth round will be held between Tottenham and Manchester United on June 19, at 19:15 GMT. Check out a sports prediction by Bettonus.

The “Spurs” are ranked eighth in the standings (41 points), and they are one point ahead of London Arsenal. At home, Tottenham played 14 games in which it won 8 times, had 2 draws and lost 4 matches. In the last 5 fights, they achieved three victories and two losses. In the last round, the Spurs played a 1-1 draw against Burnley. José Mourinho’s team is preparing for the game with Manchester United without any special staff losses, so they will try to score points to get closer to the European Cups zone.

The “Red Devils” finally found their game style under the guidance of Ole Gunnar Solskjær and didn’t lose in five rounds in a row (3 wins and 2 draws). In the final round, the team defeated Manchester City with a 2:0 score in the principle derby. That allowed the team to gain a five-point lead and get closer to Chelsea by three points. As for their away performance, Manchester United didn’t do a great job — only two victories in the last 6 meetings.

The bookmakers’ odds for the upcoming event are as follows: Tottenham — 3.01, a draw — 3.55, and Manchester United — 2 .47. In 7 out of the last 9 head-to-head meetings in the championship, a bet on total under 1.5 in the first half was successful. We recommend considering that teams will score at least one goal in the first forty-five minutes for 1.40. Tottenham didn’t kick before the break in 8 out of the previous 11 face-to-face games in the EPL. The odds for such a result are 1.60. At the same time, Manchester United didn’t kick in the second half in 8 out of the last 11 head-to-head plays in the Premier League. The odds for such guests’ efficiency are 2.00.