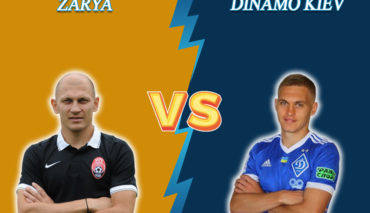 The Bettonus team has prepared the prediction for the upcoming event between Zorya and Dynamo Kyiv. The match will be held in the framework of the Ukrainian Premier League on June 13.

The Luhansk team shares 2-3 lines with Dynamo Kyiv — each gained 49 points in the tournament, but Zorya has better additional indicators and is ahead of the rivals. In the last round, Zorya got a victory against Kolos with a 1:0 score. Before that, the players were defeated by Alexandria with 0:1 score. Now they are going to fight with the Kyiv team, having impressive statistics of home performances — 8 wins in the last 9 meetings.

Shakhtar defeated the team with a 1:3 score on the last spring day. This event was a great push for the players: in the following round, Dynamo got a victory against Alexandria with a marvelous 5:1 score. This match was marked by the great performance of midfielder Vitaliy Buyalsky, who scored 2 goals and gave a successful pass. He could have made a hat-trick, but did not realize the penalty. That was the third win of Mykhaylychenko’s team in the last 5 games.

The bookmakers’ odds for the upcoming event are as follows: Zorya — 3.58, a draw —3.20, and Dynamo Kyiv — 2.02. In 4 out of the last 5 games between these two teams, there were more than two goals kicked per meeting. You can consider a total over 2.5 for 2.10. The rivals kicked goals in 5 out of the previous 6 face-to-face matches. We recommend placing a bet on the both to score for 1.85.