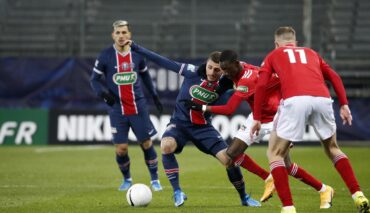 In the 38th round of the French championship, Brest will play at home against PSG. The match will take place on May 23, 2021, and will begin at 22:00 Moscow time. The prediction for the Brest vs PSG match will help forecast the winner of the upcoming game.

By the last round of the championship, Brest had not yet solved the problem of maintaining a residence permit in the elite of French football. The team is only 1 point ahead of the relegation zone, while PSG is one point away from the first place in the French championship standings. So, PSG will certainly try to secure the maximum points in the game.

Before making a prediction for the Brest vs PSG match, let’s consider the results of the last three head-to-head meetings between the teams:

Historically, the first face-to-face meeting of the teams took place on October 4, 1970, and ended in victory for PSG with a score of 2-1. The teams have played 34 games against themselves, in which Parisians won 18 times.

The Brest vs PSG match will take place to the clear advantage of the away team. The Parisians will attack on the move, play as reliably as possible in defense and confidently bring the fight to a victorious conclusion. Brest will not be able to resist the opponent’s stellar line-up.