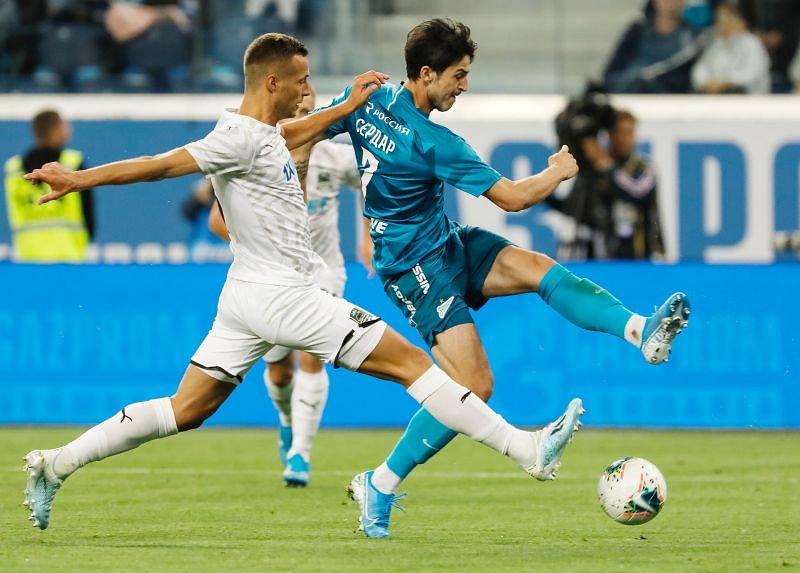 On Saturday, August 7, the matches of the 3rd round of the 2021/22 season of the Russian Premier League Championship will continue. The Saturday football evening will open with the Zenit vs Krasnodar match at the Gazprom Arena in St. Petersburg. The game will start at 17:00 Moscow time.

The head-to-head meetings of these two teams are always characterized by a stubborn and fierce struggle on the football field. It is likely that this time also, we will be having an interesting match, with intrigue and surprises. We offer a prediction for the Zenit vs Krasnodar match, which will help you to make the right bet.

The defending champion of Russia has not yet lost any points since the start of the 2021/22 season of the RPL Championship. In the two previous rounds, Sergei Semak’s wards managed to achieve the maximum result, thereby leading the RPL Championship standings with 6 points. In the second round, Zenit from St. Petersburg defeated Rostov in a bitter struggle. The score of this tense match was 2-4 in favor of the guests. Nevertheless, despite the successes, it is alarming that the champion not only scores a lot but also concedes a lot.

Viktor Goncharenko’s team brought an unpleasant surprise to their fans in the last round. At home, Krasnodar unexpectedly yielded to guests from Khimki. A defeat with a score of 0-1 in a game against such an opponent is an unpleasant fact. Moreover, the loss of points does not fit into the team’s plans at the start of the season.

The history of head-to-head confrontations between the Zenit and Krasnodar teams totals 20 matches. The overwhelming advantage in the number of victories remains with the St. Petersburg Zenit (12 wins against 3), while five meetings ended in a draw.

Probably, there will be a sharp and stubborn confrontation in the upcoming game. The guests are eager to rehabilitate themselves after their last unfortunate defeat. However, Zenit is not so much a team that will allow their opponent a lot of scoring chances on the football field. Therefore, the prediction for the Zenit – Krasnodar match tends to be an outcome in which the national champion will be stronger.

Probable result – the victory of Zenit.