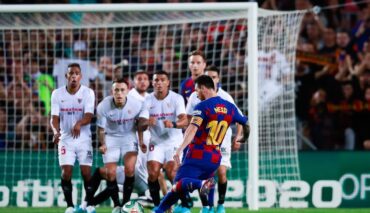 On Wednesday, March 3rd, the finalists of the National Cup will be determined in Spain. Of the two scheduled for this day, we are interested in the result of the clash in Barcelona, ​​where at Camp Nou Ronald Koeman’s charges are receiving a return visit of Sevilla. The match will be very interesting and exciting. Since both teams are well-known rivals,  their clash on the field in the format of any tournament always promises to be interesting.

It should be recalled that the first game, held on February 10, was won by Sevilla with a score of 2: 0. Sevilla’s two-goal advantage over the return game at Camp Nou makes Julen Lopetegui’s men the favorites of this confrontation. However, several factors can affect not only the game itself but also the final result.

We offer a prediction for this game, which is definitely worth the attention of fans of Spanish football.

Ronald Koeman’s team is in shambles on all fronts this season. Stubborn struggle in the La Liga championship, participation in the Champions League playoffs, participation in the Spanish National Cup. Until today, the “pomegranate-blue” have been doing well, making their way up the tournament ladder. However, a failure in the team’s game happened.

In the first semifinal match of the Spanish Cup, the Catalans lost 0: 2 away from Sevilla. A week later, Barcelona suffered a humiliating 1-4 defeat in the first leg in the round of 16 against Paris Saint-Germain. It was followed by a misfire in the Spanish La Liga championship, a home draw 1: 1 in the match against Cadiz.

Nevertheless, despite the setbacks, Ronald Koeman’s men managed to cope with the game crisis. This is evident by the results of the last two league matches: a 3-0 win against Elche and a 2-0 away win against Sevilla. This result can affect the outcome of the upcoming meeting of these two teams in the Spanish Cup.

Julen Lopetegui’s men are physically and psychologically loaded this season no less than their rivals in the semifinals. The Sevilla team is on the heels of the leading group in the championship and is ready to intervene at any moment in the fight for the championship title. The team has 48 points and fourth place in the standings. The recent defeat of 0: 2 in the match against Barcelona was a little upset by the successful promotion of the team up the tournament ladder.

As for the team’s participation in the national Spanish Cup, the team is doing well in the tournament. A win in the first leg gives Sevilla a slight advantage ahead of the return leg at Camp Nou.

Teams Barcelona and Sevilla have a long history of head-to-head confrontations rich in surprises and a long history. Over the years of participation in official tournaments and competitions, the “Pomegranate Blue” and “Sevilla” have met  189 times. An undeniable advantage in the number of victories on the side of the Catalan team (106 wins against 46 losses). A total of 37 matches ended as a draw between these two teams.

The teams have met each other three times this season. In the first round match at Camp Nou, the teams drew. Then there was the first semifinal game for the Spanish Cup, which ended with the victory of Sevilla. The teams played for the third time just four days ago. In the match of the 25th round, the victory was celebrated by Ronald Koeman’s management.

It is as difficult to predict which team will win the upcoming match as to pick the name of the team that will be able to reach the Spanish Cup final. Based on these facts, it would be too risky to bet on the victory of one of the teams. We offer you to bet on effective football. There is no doubt that both teams will score in the match.