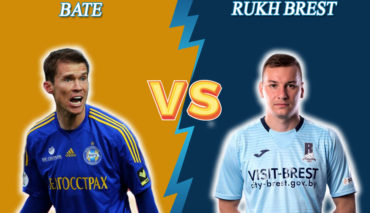 At 13:30 GMT, BATE will host Rukh, and that will be a match of the third round of the Belarusian Premier League.

The long-time irreplaceable champion of the country started the season pretty badly: they ranked fourteenth, and only a bigger number of goals saved them from the last place. They were defeated by FC Energetik-BGU and FC Slavia-Mozyr at the championship’s start. These two sensational losses showed a crisis in the team after the change of the coach. For example, last season the team was competing with Dinamo Brest for a top position almost to the tournament’s end. They also lost four times only. However, it should be noted that the Borisov team is still participating in the Belarusian Cup. The change of coach so far has only had a negative impact on the championship.

The team is this season’s newcomer to the Premier League. In the first round, they defeated another loser of this season’s start, Dinamo Minsk, with a 0-1 score. In the previous round, Rukh lost to Energetik-BGU, a so-called BATE’s offender, with a 1-0 score. Overall, the team ranks ninth in the standings.

Despite the unsuccessful start, bookmakers believe BATE is an absolute leader of the upcoming event. The odds for their victory are 1.32, for Rukh’s win — 11, and for a draw — 6.25. A home match, far from the strongest opponent — it is a great opportunity to interrupt a series of failures, isn’t it? However, the case is more ambiguous: BATE has issues in the protection strategy and scored only five times in the two previous rounds. The odds for both teams’ scoring are more than 2.2. Rukh will try to take an advantage over BATE with its active counterattacks, and their standard style is always pretty dangerous for competitors. At the same time, the host team will do its best to get its first victory.