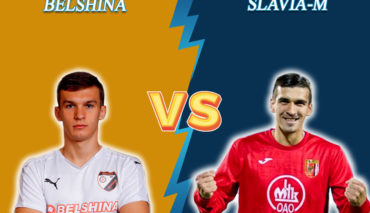 The meeting of the 11th matchday of the Belarusian Premier League between Belshina and Slavia-M will be held on May 30 at 14.00 GMT. Sports predictions from Bettonus.

“Belshina”, just like “Smolevichi”, performs in the championship without victories. In addition, the “rubbers” played one match more than their rival in the struggle for survival, which exacerbates not the bright prospects for the Gradoboev’s team. In 10 matches, there were only 3 points scored, 7 goals scored and 20 goals conceded. Thus, “Belshina” is the most conceding and the most losing team in the championship. There are already 7 defeats under its belt. The latter happened in the recent away match against “Shakhter Soligorsk” 0:4. At home, everything is also not so good: 2 draws and 3 defeats, 3 goals scored while 9 goals conceded.

The “Slavs” are in the 11th place with 12 points after 10 rounds played. The difference between scored and missed goals is 11:15. In the last home match, they could not beat “Gorodeya” (1:1), confirming poor statistics of home games. This is the fourth match when the team of Mikhail Martynovich cannot win in its native arena after an unexpected victory over “BATE” (3 draws and 1 loss). At home, the Mozyr residents do not perform well in the attack. On average, the team scores less than one goal. The difference between the scored and missed goals in the games held in Mozyr is (4:5) in 5 matches.

“Belshina” did not lose in their last 9 head-to-head meetings in the Premier League (6 wins, 3 draws) – you can take the event “Belshina Win or Draw” for a coefficient 1.60.

More than 1 goal was scored in 6 of the last 7 head-to-head meetings in the Belarus Championship – a bet “Total Over 1,5” for a coefficient 1.48.