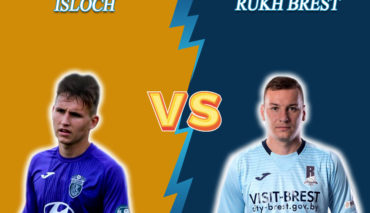 The Bettonus team has prepared a prediction for the upcoming match between Isloch and Rukh Brest, which will be held in the framework of the Belarusian Premier League twelfth round on June 6.

The “Wolves” failed to win the third match in a row, so they allowed Dymano Brest to overcome them in the standings. Now Isloch are ranked seventh with fifteen points gained. During the last away game with BATE, the team Vitaly Zhukovsky showed off their professionalism and lost to the rivals with a minimal 0:1 score. So the “Wolves” are to improve their status in the standings in the upcoming home meeting with Rukh. As for the team’s performance at home, the players achieved three victories in the previous four games.

Rukh failed to rise above the middle of the table. In the last round, they lost to Dynamo with a 1:4 score. If the teams had almost equal chances to win in the first half (they both scored), the players of Serguei Sednev didn’t manage to cope with the rivals’ pressure in the second half and conceded three goals. At the moment, Rukh Brest is ranked ninth and has fourteen points gained. The team of Sednev plays better away than at home — just one loss in the previous six meetings, and that was to a strong opponent (BATE defeated Rukh with a 0:1 score).