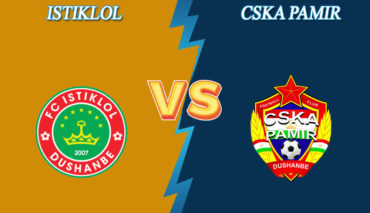 Istiklol will host CSKA Pamir, and that will be a match of the Tajikistan Higher League second round.

In the first round, the champion defeated Dushanbe-83 with a 7-0 score. The double sending off didn’t affect the game course. To note, it occurred in the first half and was caused by the players’ fighting. Last season, the team kicked more than 3 goals on average per game and conceded little more than one. Overall, out of twenty-one matches, they had just two losses and three draws. The difference between the first and the second places in the standings is fifteen points.

In the first round, the team was defeated by Khujand with a 1-3 score. They ranked fourth in the last season, and then the difference between them and the second-place team was seven points, between them and the third place — one point. As for their achievements, along with the champion, this team was one with the smallest number of conceded goals during away games — twelve goals during the season.

The hosts are a definite leading team in the upcoming event. The odds for their victory are 1.1, while for guests win — 19, and for a draw — 8. In the previous championship, CSKA defeated once with a 3-2 score and lost twice with 3-0 and 1-4 scores. Therefore, you can safely bet on the hosts’ handicap of -2.5 for 2.06 or on Istiklol win and BTTS for 2.9 (by the way, you may try to bet on W1 and both teams not to score for 1.6). An individual total of the hosts are more than 3 for 2.1. The champion isn’t likely to be chilling and continue their game tempo which they got during the last season (they scored on average 2.86 per game and 2.5 per home match).