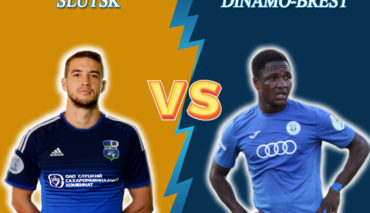 The team inflicted a defeat on Slavia-Mozyr with a 3-1 score in the last round. By the way, there were five penalties in the match. Slutsk appeared to finish the previous season at the bottom of the standings. However, since there is team chemistry between the players and a great preseason preparation was done, Slutsk didn’t suffer a loss six matches in a row — in total, twelve kicked goals and only four conceded ones.

The Belarusian Premier League champion started the new official season by winning the Super Cup in a rather tense match with FC Shakhtyor Soligorsk. After that, there were two complicated matches with Isloch in the Belarusian Cup. They finished with a series of penalty kicks. To note, the first game distinguished with a great number of red cards — four in total. Even though Dinamo won the last six matches, some problems with play efficiency are obvious: the team managed to score only twice in the Super Cup. The overall number of kicked goals after six matches equals five, while the one is conceded.

A rather average performer, Slutsk has gained momentum and now is going to play with the football champion who is facing not the best times though. The match seems to be very tough and challenging for both teams. Obviously, Dinamo is striving to win after its slip in the first round. Bookmakers believe Brest to be a leading team: the odds for their absolute win are 1.53. However, the situation is pretty ambiguous. Both teams haven’t shown impressive results in this season: each of them has scored just once. That’s why the total is less than 2.5 for 2.19.